Awesome Adelaide is proud to announce as the recipients of the March 2015 funding round the incredibly awesome Alex Bishop-Thorpe and Aurelia Carbone from The Analogue Laboratory (housed at The Mill) for their project to “Make Better Magic”. 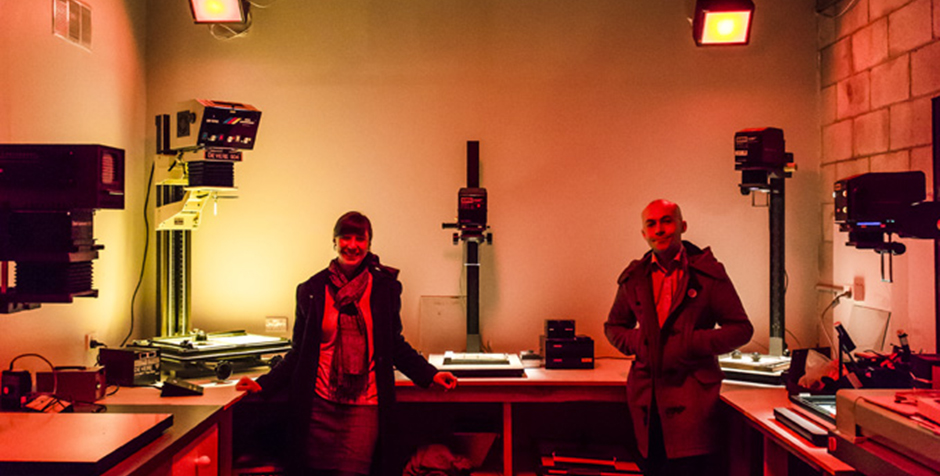 Over the past 2+ years Alex and Aurelia have undertaken the enormous task of setting up and establishing a working public darkroom for budding and established analogue enthusiasts.

The duo run a series of highly successful photography and development training workshops, providing the tools and chemistry to rent for those who just like them, like to make things – especially those kinds of things that are best created under the soft hues and acrid smells of a blackened out darkroom.

The funding awarded by the Awesome Foundation will allow them to bolster their not-for-profit creative space by enabling the purchasing of a much needed ventilator so they can work with a greater variety of chemicals. This will take The Analogue Lab to the next level of awesome. Also planned is the construction of a light table; enhancements to the electricity system; and work on creating a better film cutting space.

As Alex describes, The Analogue Lab “just wants to make things better”. “Upgrading is exciting,” says Aurelia, “first of all because we are artists – we like shiny new things and want to build new things and getting to do this makes us do the happy dance – but also because we see a lot of people coming back to our space and when those people come in and see the new stuff then they also do the happy dance too. So we have a lot of happy dances happening, which is great, and this funding allows us to develop even firmer footing in terms of continuing to turn up each day with the intent to improve ourselves as artists and to improve the space for others to use, which ultimately allows others to get better at the analogue practice as well.”

As Aurelia reports on the benefits of receiving the funding, “Awesome is going to make such a difference and $1000 goes a long way. This is especially so since we rely on workshop attendance just to pay the rent and often don’t have anything left over to make improvements to the space. Also, we often can’t apply for regular state funding because of the nature of our facility – we are either not considered a ‘proper’ organisation or we haven’t ‘existed long enough’ or we don’t seem to hit the marks that [traditional philanthropic funding bodies] want us to hit… What makes Awesome awesome is that it doesn’t follow the regular ‘red tape’ rules. It’s much more people to people.” And Alex adds, “by the time we finish between running our practice and managing the business, there is so little space to sit down and incorporate as a non for profit or go through the loops of traditional funding bodies that it can feel like we need another two of us just to keep on top of it all. Awesome cuts through all that with its simplified process of four questions to apply and no need to acquit.”

Boasting the biggest revolving darkroom door in the country, a series of cheekily named enlargers (Heidegger is first to greet you on your way in), and an abundance of donated tools, equipment, chemistry, and support, The Analogue Lab was developed (pun intended!) through a combination of good will, patience and extraordinary patience. As Alex, a notorious hoarder and collector of darkrooms, explains:

“IT started ages and ages ago, when darkrooms were closing down in the early 2000s. I started buying darkrooms because people would put them on Ebay for less than a $1 pick up only and I happened to have parents who collected Edwardian furniture and were okay with me hoarding things. So for about 4 years I bought darkrooms and filled up a shed with darkrooms, all without much idea what I was going to do. Then I went to university and after finishing my course realised there was nowhere to do this kind of stuff. Aurelia, a fellow uni student and I both realised we needed a darkroom so we started to talk about the idea by just looking at what we needed, how much it was going to cost and then once we were committed and our names were on everything began to grow from there. It was scary to make the leap, and took some time but it works and now we have a darkroom for anyone and everyone to use!”

The team at Awesome believe that The Analogue Laboratory is an awesome initiative not only because of Alex and Aurelia’s clear deep-seated commitment and compassion for the development of all things analogue, but also because of how this commitment and compassion feeds into and enhances the community around them, therefore making South Australia in general just THAT much awesome as a result!

As Alex summarises on the beauty and significance of keeping what is widely considered to be a dying form of creative practice alive (and printing!): “Photographs are objects. They are fragments of the world and acquire rips and tears and stains and abuses as they move through the world as well… Photographing landscape, or photographing yourself in a particular space and then seeing that space through a physical image is so important. You interact with it differently, it has a connection to the body and an impact that just doesn’t occur in our predominantly digital landscapes these days. Unless the photograph is real, you don’t connect into it in the same way and this is why I have to be in a darkroom. Otherwise it doesn’t make any damn sense!” – We agree Alex, and we support your and Aurelia’s awesome!

How The Analogue Laboratory propose to spend the Awesome Fund:

Alex’s and Aurelia’s Tips for Applying to Awesome:

More Awesomeness about The Analogue Laboratory

The Analogue Laboratory is based The Mill complex at 154 Angas Street, Adelaide, South Australia. They offer darkroom hire and a range of workshops with no previous training required. More info about how to apply and what courses are available here.

Alex is a South Australian Photographic Artist who likes to make things. His work embraces a range of experimental and antiquarian photographic techniques and materials as well as interdisciplinary projects. http://www.alexbishopthorpe.com/

Aurelia is an artist and single mother-of-two. In her photography and installation work she uses illusions to describe the nebulous relationship between the real and the imagined. http://aureliacarbone.com/

Make sure you don’t miss out on Awesome updates